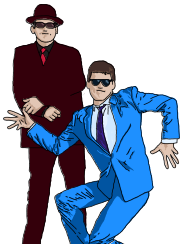 Barso was born in London on the 21st of April 1958 and lived just around the corner from Lee Thompson in Highgate. They'd frequent the Aldenham Boys' Club and that was where they met Chris Foreman. In those days they used to find their own entertainment rather than going off to gigs. Mike would meet the other two at the local launderette or somewhere similar and come up with the master plan of the day. They'd stow away to Wilesden or Tottenham on freight trains to do some shoplifting or set fire to a load of dustbins on the top of the hill at Hampstead Heath.

When Barso left school he went to Hornsey Art College to draw, but soon found that that isn't what it's all about at all. The lessons seemed to be more about talking waffle than learning to draw. As a result, he found a new interest at college - playing the piano in the hall. He'd quite often spend the whole afternoon there and, although he had a few classical lessons, most of what he knew when he started the band came from what he'd taught himself during those sessions. He also learnt a lot by playing along to records.