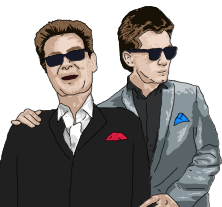 Chas was born in London on the 14th January 1959, but he used to travel around a lot as his parents were both dancers. He doesn't think that's where he got dancing from, though, because he didn't dance when he was young and his parents were traditional Irish dancers.

He started dancing at the Madness gigs in the Dublin Castle pub in Camden Town. Thommo used to like to mess about a bit and experiment in nutty ways and one evening he asked Chas to introduce the band for a change. Up until then he'd always danced in the audience, but then he began to dance on stage instead - he had such a good time that he refused to get off!

Chas had got to know the band long before then in any case, hanging around pubs in London. He first joined the band as a bass player, but left when he found that he couldn't get on with Barso.