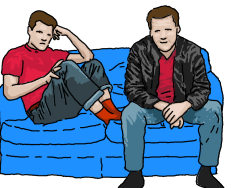 Suggs was born in Hastings on the 13th of January 1961. He lived in Wales with his aunt and cousins for a while, after his parents were divorced, and then he and his mum moved around a lot for a time before settling in London.

He went to school at Quinton Kynaston in Swiss Cottage; which was set up in the 1960s as an easy-going comprehensive. As with most comprehensives, hooliganism was rife and Suggs soon found that it was easier to follow the bad kids than the good. They used to bunk off and watch Chelsea play, among other things, though he never became a "proper hooligan".

The first time Suggs saw the group perform was when they played at a mate's birthday party in the garden; under their original name The Invaders. He thought they were great - really original. The band heard him singing one night and jokingly asked him along to a reheasal; he went along though he knew they were teasing and sang See You Later Alligator. Apparently he was terrible but not as bad as the others who auditioned and so he became lead singer.

Suggs is still quite a sports fan and enjoys watching Chelsea play. While the band was still under the banner of The Invaders, he would miss rehearsals in favour of football matches until the other members kicked him out. In the Take It Or Leave It commentary, Chrissy Boy says that he'd come along to gigs and make it clear that he was sorry and wanted to return to the line-up. While John Hasler, who had taken to the mic in his absence, was on holiday Chrissy overrode Barso's authority and asked Suggs to sing for them at a gig that Bedders had arranged. After that, he was a permanent fixture again.