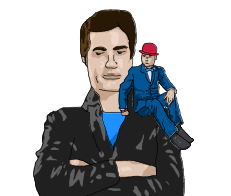 Chrissy was born in the University College Hospital on the 8th of August 1956 and grew up in Kentish Town. His father was a singer and tried to teach him to play guitar, but Chris didn't want to play things like Bobby Shaftoe.

He went to Owen's Grammar School in The Angel and left with an English O level at the age of 16. He then got a gardening job with a certain Lee Thompson. Chris and Lee were both interested in music and kept saying that they wanted to start a band and then one day they did. Along with Mike Barson, they formed a band called the North London Invaders.

In the beginning, only Mike really had any idea about what he was doing; he was pretty good. In contrast, Chris couldn't even play chords and used to play one string at a time.