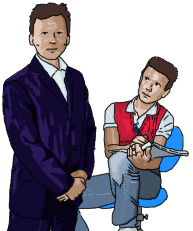 He bought his first drum kit off a mate for a fiver; it was a bit ropey and it was held together with selotape and wires. His brother would assist him as he practiced on his kit in the bedroom and eventually they got a band together called "Steel Erection". After a while he met Mark Bedford, who would call round for the odd jam session, though they were never in a band together until Madness.

After a scuffle with sax player Lee Thompson, the drummer Gary Dovey left Madness and the band needed a replacement. Woody heard about it and contacted Bedders, saying that he'd heard that they wanted him to join! After a quick rehearsal, which the band liked, he became the final member of the then six-piece band.